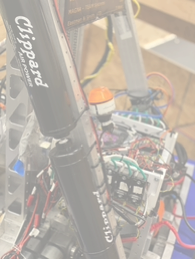 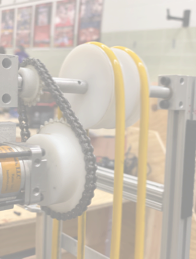 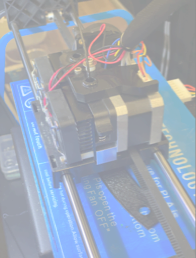 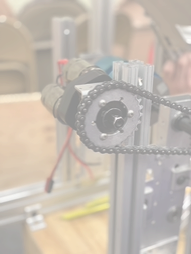 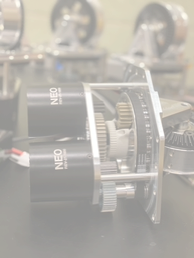 In 2000, Bedford Public Schools was introduced to F.I.R.S.T. (For Inspiration & Recognition of Science & Technology)  robotics by Dana Corporation’s Brenda Moyer.  Ms. Moyer approached her sister &  Smith Road Elementary Teacher, Debbie Moyer-May, offering to finance a F.I.R.S.T. Lego League team for SRE.  Together, they created the Dana Unicorns F.L.L. team. With the funding and engineering support from Dana and the Bedford Public Schools' support, the Bedford FIRST Robotics program was born. In 2002, members of the Dana Unicorns FLL team attended the unveiling ceremony for Dana’s FRC Team 279, Tech Fusion.  Older members of the team were ready to move on to the high school, but we had no team.  There the students met Mr. Dick Micka from La-Z-Boy corporation.  Members of the Dana Unicorns traveled with Coach May to do a presentation for La-Z-Boy.  This introduction and presentation proved to be valuable as he offered to provide $5,000 to Bedford High School to seed a FRC team.  After receiving financial backing, the students approached BHS math teacher, Ellen Bacon, and convinced her to coach the team.  With the support of Tech Fusion, Dana’s mentors, the financial backing of La-Z-Boy, and a coach, the students were able to register the first Bedford High School team.  That fall, they officially became Bedford Express FRC Team 1023.

In 2003, members of Bedford Express (BX) experienced their first season, Stack Attack.  BX created a train theme and created T.H.O.M.A.S. the robot. This rookie team was able to set things on fire, winning the “Rookie All-Star” Award at their first regional competition, Great Lakes Regional,  held at Eastern Michigan University.  This is the highest rookie award and automatically advanced them to world’s.  At world’s, the team impressed the judges and brought home the WORLD Rookie All-Star Trophy. Bedford Express was off to a fantastic start.

In 2004, the team was able to refine the build process and produce a strong robot, the Yellow Dart.  The team competed in two regional competitions and made it to the semi-finals at both the Detroit Regional and the Great Lakes Regional.

In 2005, the team chugged along and brought home a judges award from the Great Lakes Regional along with advancement to the finals.  Robot “Hurricane Bacon” was a strong competitor in the “Triple Play” competition.

In 2006, the team produced the “Ellenator.”  They won the Johnson and Johnson Sportsmanship Award at the Great Lakes Regional.  They attended world’s for the first time since their rookie year.  They ended up 7th place in the Archimedes Division, which included 84 teams, at the World Championship in Atlanta, GA in the Georgia dome.

In 2007, BX created “Shake ‘N’ Bacon” to compete in the “Rack and Roll” challenge.  This year the team made a pneumatic claw, which proved to be very effective in picking up and moving the tubes.  The team did very well and were finalists in both the Great Lakes Regional,  held at Eastern Michigan University, and the Boilermaker Regional, held at Purdue.

In 2008, the “Baconator” came to life in the “Overdrive” challenge.   The team advanced to the Quarter Finals at the Great Lakes Regional and attended World’s in Atlanta, Georgia.  Sadly, this was Mrs. Bacon’s final year as coach as she retired from teaching and coaching.  Mrs. Bacon started a great tradition and helped create a very strong tradition in Bedford.

In 2009,  Debbie Moyer-May and Nick Poskarbiewicz took over as coaches.  They had coached at the FLL and FTC levels, but this was their first year with the high school team.  This year, Michigan also restructured the competition process and piloted a new district program for the state.  The team transitioned into new leadership and brought on a strong class of freshman.  The team created a highly advanced robot, which they took to their first Michigan District in Lansing, Michigan.  The team was awarded the Engineering Inspiration Award for the strong engineering of their robot.  Unfortunately, as beautiful as this machine was, it was quickly evident that it could not compete with faster, less precise machines.  The running joke became that the team made a Cadillac when they needed a dump truck.  The team modified their turret system to improve speed at the cost of accuracy.  At their second district held in Troy, Michigan, they improved and were once again honored by the judges with the Delphi Driving Tomorrow’s Technology Award.  The “Lingle Lander,”  named after engineering mentor Tom Lingle of RD Tool and Manufacturing, made a journey to Atlanta to compete in the World Competition and was the team’s first crab drive robot.

In 2010, BX continued to advance their FIRST Experiences.  This year, the team focused on reaching out to other teams and to the community.  BX created “Ringgo” in honor of mentor Bruce Gonring.  Ringgo was a soccer playing robot that was selected by Team 67 (Who’s HoT? Heroes of Tomorrow) and Team 51(Wings of Fire) to compete in finals.  The “Hot Wings Express” formed a strong alliance, which ended up taking home Bedford’s first win and first blue banner. BX also brought home the Motorola Quality trophy. BX was grateful to the HoT team and Wings of Fire for this experience. Next, Ringgo traveled back to Troy for the team's second district and we were awarded for the team's business plan with the  “Entrepreneurship Award sponsored by Kliner Perkins Caufield and Byers.” The team earned enough points in the district to advance to States, however, the funding was not there.  Due to this inconvenience, the team mounted a “200 for 20″ campaign, which was the idea of reaching out to the community to find 200 people or businesses to give $20 each.  The team successfully raised the $4,000 needed for states in 3 days! At states, the team qualified for world’s but was unable to attend due to finances.

In 2011, BX soared above the competition as they traveled back to Detroit for their first district of the season.  The Poskarbinator, named for Coach Poskarbiewicz, performed marvelously.  The team ended up 4th seed after eliminations.  The team also won the “Rockwell Automation Innovation in Control System” trophy.  BX then moved on to Livonia for the first ever Livonia District event, held at Churchill High School.  The Poskarbinator  dominated this competition and ended as the 1st seed.  The team invited team 2137 (TORC) and team 3617 (Cold Logic) to join them for finals.  Together, this alliance proved unstoppable, bringing home Bedford’s first win as an alliance captain.  In addition to winning the tournament, BX won the Underwriters Laboratories Industrial Safety Award,” the district “Chairman’s Award,” and the “Coopetition Award” for loaning a mini-bot to Tecumseh for the competition.   1023's performance advanced them to states and they promptly began their 2nd “200 for $20″ to earn money.  The community again supported the team by donating enough money to cover the $4,000 entry fee.  The team traveled to states and was chosen by Team 27 (Team RUSH) and 245 (Adambots) to advance to eliminations.  The alliance lost a very close match in the finals, but took home Michigan Finalist trophy.  Additionally, the team won the Michigan State Chairman’s Award which advanced them to world’s to compete with the other Regional Chairman winners.  Additionally, Junior Shelby Beavers, was selected as one of 6 Michigan team members to be selected as “Dean’s List” winners.  The team did phenomenal at world’s and had it’s highest achieving season, finished by advancing to semi-finals in their division.

In 2012, we won all matches at both of our district events. Our most prestigious awards that we won in 2012 were the Engineering Inspiration Award Regional and the Winners Industrial Safety Award sponsored by Underwriters Laboratories. Our alliance scored the highest in all of our competitions.

In 2013, we had a great bounce back season. This year's challenge was called Ultimate Ascent. The main objective for this challenge was to shoot frisbees into a small opening. To end the game, a robot from either team had to climb a pyramid that was ten feet tall; that is what we built our robot, Ms. Spocke, to do and we did it very well. At our Detroit competition, we had a little spill off of the pyramid, but we were back and running within only a few matches. We won the Engineering Inspiration Award at the Detroit competition and won the Chairman's Award at Bedford. This is the year we became a world known team.

In 2014, we had a great season! This season's game was called Aerial Assist. The challenge was to work with your alliance partners to shoot a big ball into big goals or push them into smaller and lower goals on the ground.

In 2015, Bedford Express had the best season to date. We dominated FIRST in Michigan, taking home the State title. At Worlds in St Louis, we won our division, but sadly lost in the finals.  2015 was the most successful year Bedford Express every had, to this date.  Claiming a record of 105 wins and only 11 loses, we were ranked 4th in the world and also won the coveted IRI championship!

In 2016, FIRST Stronghold was a competition in which teams had to overcome obstacles in the center of the field and make it to the opposing alliance's tower to shoot "boulders" and weaken the tower defenses. In the end game teams had the opportunity to scale the towers and earn extra ranking points in a capture.

In 2017, we fought to fuel the airship of "FIRST Steamworks." Our robot, which had no name, had to fuel a boiler and fix the airship to lift off. We made it to Worlds competition and won the "Engineering Inspiration" Award.

In 2019, we lifted off for space with our robot, Cycle Mode. Back down to one team, Bedford Express made it again to the Worlds competition with over 50 team members. Unfortunately, this was Coach May's last year and we were sad to see her go, but what she taught us will always be with us. After the season, with our new coach, Dennis Costlow, we fought hard in the 20th annual IRI off season competition. Overall, we won two Gracious Professionalism Awards, a district competition, and finalist position in the Jackson district event.

2020, the year that started strong, and ended early. Infinate Recharge! Sponsored by Star Wars and Lucas Films.  We had one of the best robots in Michigan and after week two, we ranked #1 and #4 in the poles.  Due to the world wide COVID-19 pandemic, the schools were closed, the cities and country were closed and the FIRST seasons were canceled.  We won two blue banners:  Jackson's District Winner and Jackson's Chairmans Award.  We also had Junior Lexi Fischer win the Jackson District Dean's List and then became a State of Michigan Winner to advance to the World level.

2021, Continuation of the COVD-19 pandemic moved the season to a virtual re-play of the 2020 year's game, Infinat Recharge!  While we did not compete as a normal season would have entailed, we were able to meet in small dedicated groups for programming, game design, and Chairmans.  We were excited to build upon our blue banner collection by winning the "FIRST in Michigan Chairmans Award, Remote District" as well as the "FIRST in Michigan Chairmans Award" State award.

WHERE WE CAME FROM  •  WHERE WE ARE GOING